Many, many years ago, I had access to a World Warrior machine, and it spurred me to finally learn the Guile glitches which were so awesome during WW’s heyday. There were a couple of articles on the net even back then, but they didn’t seem comprehensive enough for me. I wrote my own half assed guide, but found it was indeed pretty hard getting the explanations out usefully.

Recently I decided to completely redo my guide, and since there are considerably more tools for macros/scripting in emulators, I thought I’d nail down the details on some of the glitches I thought I knew how to do. I learnt a few things! I also decided I’d make a frame-by-frame instructional video on the inputs needed to perform these glitches. Hopefully it’s in-depth enough and clear enough that any person familiar with Guile should be able to do these glitches in no time.

Here’s the lua macros and instructions for reproducing the glitches automatically, if you’re interested.

So, without further ado, here’s the video transcription and some additional technical notes. 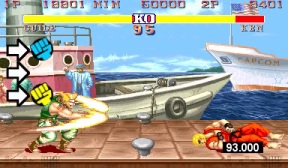 Guile throws a Sonic Boom without needing to hold back to charge.

Perform a Strong throw, then continue holding the same direction and press any Punch button just after recovering from the throw.

You can walk forward a little and still get a Sonic Boom out.

While this isn’t particularly useful on its own, it can be combined with some other glitches.

Extra notes:
It seems that the first two frames of recovery after the throw do NOT give you the auto Sonic Boom, only a normal punch. But the 10 or so frames after that DO. Perhaps the ‘start of free sonic boom charge’ glitch starts slightly into the strong throw animation, so enough charge is only built up 2 frames after the throw recovery? Regardless, you can get a jab out as well as a Sonic Boom in the time period.
Also, using Jab seems to allow for a later sonic boom than Strong does. As all the Sonic Booms have the same frame data, regardless of punch button used, I’m not quite sure why this is. 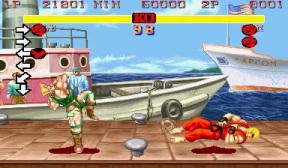 Guile becomes stuck on a recovery frame of his upside-down kick.

While having most of a charge for a Sonic Boom, press Back+Roundhouse while near an opponent to perform the upside-down kick. DURING the animation, press towards and any Punch for a sonic boom, and Guile will freeze near the end of the animation.

While Guile can be hit out of stance, this frame of animation has no low hurtbox, so is invulnerable to most low attacks.

Escape Stance at any time by performing a flash kick. If time runs out or you KO the opponent into Stance, the game won’t continue until you escape Stance.

Stance looks cool but is not generally useful, but is a requirement for other glitches.

Some Computer opponents will react to Stance in certain ways, which can allow for good setups into other glitches. e.g.

Extra notes:
The upside down roundhouse takes nearly 50 frames of animation, but cancelling it into special moves (such as Sonic Boom) before the 5th frame results in that special move successfully coming out. So as long as you have charge for a Sonic Boom anywhere from frame 5 to 49 of the kick, you can perform this glitch. A Sonic Boom requires roughly 59 frames of charge. 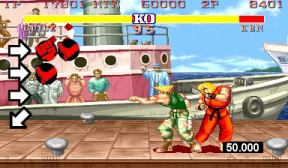 Guile throws the opponent without touching them.

For a Magic Throw away from you, while in range for the Upside-down kick, charge a Sonic Boom then walk forward slightly, then press Roundhouse followed by Fierce or Strong one frame afterwards. The button presses are exactly like Plinking in Street Fighter 4.

I do this by hitting Roundhouse with my third finger followed by my middle finger on Fierce.

For a Magic Throw towards you, while in range for the upside-down kick, charge a Sonic Boom then quickly tap forward then back on the stick, then press Roundhouse followed by Fierce or Strong one frame afterwards. The towards magic throw has slightly less range due to not walking forward before the button presses, but as the opponent is brought towards you, follow ups are more possible.

For repeated Magic Throws away from you, perform the initial magic throw then simply hold forward and tap Roundhouse,Fierce at the right time.

For repeated Magic Throws towards you, perform the initial magic throw towards and continue holding back, then tap forward, back, roundhouse,fierce at the right time. If the opponent crosses your body then you just have to switch direction as they cross, then press Roundhouse, Fierce.

Magic throwing from Stance requires a slightly modified motion incorporating a flash kick. Charge downback, then roll the stick to forwards then up forwards as in the tiger knee motion, hold it there a little then press and hold RH then FP or strong as you would for a normal magic throw.

Note: In the video, I mistakenly assert you need to finish at upback, this is infact not the case. Finishing at up is sufficient (although up-back is probably easier).

Basically, do the normal magic throw motions but make sure to hit the diagonals.

Magic throwing from stance can be useful on its own, but is also part of other glitches. 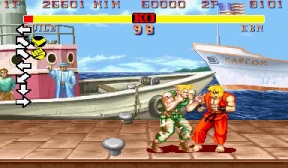 Guile throws the opponent, who then becomes frozen and stuck to Guile.

Charge down for a flash kick, perform a Strong throw then interrupt it with a flash kick. A practical way is to roll the stick from down to up-back and then flick your fingers quickly downwards over Strong punch then Forward kick.

The direction of throw you perform only changes the animation, the effect is identical.

Handcuffs is useful for wasting time, and for practicing other glitches.

The only way to escape Handcuffs is with a Magic Throw.

Note that if time runs out while you have the opponent in Handcuffs, you will be unable to escape and the machine will have to be physically restarted.

Entering Handcuffs from Stance is a little different, simply do a Flash kick with Strong punch and Forward kick at the exact same time.

Extra notes: How this motion performs a throw is a mystery to me, but I believe being in the Stance state must modify the inputs somehow (since it also requires an altered motion for the Magic Throw). Perhaps one of the L/R directions gets stuck on during it. Of course it could be argued that the animation doesn’t really show a throw being performed, so maybe it actually doesn’t. 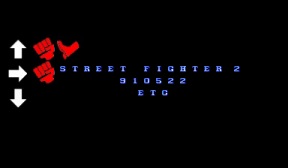 Charge down for a flash kick, perform a Fierce throw then interrupt it with a flash kick. One method is to flick your fingers downwards across Fierce and then Roundhouse. Just like handcuffs, but with Fierce/Roundhouse instead.

There’s no particularly good reason to do this, unless you want to quit in style.

Guile has a stored Flash kick which is unleashable with the simple press of a kick.

Perform a Strong throw then instantly begin charging down. Just before Guile recovers, press Up and any Kick. Guile’s animation looks like he walks backwards for a frame.

Do a normal kick.

You now have a flash kick charge stored for about 3 seconds.

Extra notes: It’s possible this bug affects World Warrior’s “random special move” seed, or maybe it really is just storing a charge for you. However, a charge runs out in about 10 frames, and this one lasts considerably longer.

Perform a Magic Throw from Stance, except let go of the buttons as soon as possible. Holding the buttons for longer than 3 frames will perform a normal magic throw. Technically it’s the Roundhouse button being held which determines this.

Fake Magic Throw from Handcuffs actually shows the animation throwing the opponent, but they reenter handcuffs.

Usually just for showing off, although it is essential for the final glitch.

Extra notes: There must be a second input check being performed for some reason, though I can’t think what it’d be for. 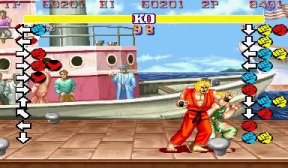 Guile becomes frozen in place, but is totally invincible!

The “Useless” Invincibility is entered by performing Handcuffs, holding the direction of the throw you are doing, and then pressing the opposite direction then punch for a sonic boom just before recovering. So if you enter handcuffs holding up-back, continue holding back, then press forward and punch. This invincibility is pretty useless because while you are invincible, the opponent is also stuck in handcuffs. But it’s good for practicing the timing for the real invincibility.

Guile is now completely invincible. No attacks or projectiles will affect him, and he is also unthrowable. In fact, the ONLY thing which can hurt him is another Guile’s magic throw – however since you can’t pick the same character in World Warrior, Guile vs Guile requires hacks.

Invincibility is considered the same as Stance in every way, so you can do the same tricks and glitches from it, and escape from it with Flash Kick, even after the round ends.

Extra notes: The sheer number of layers of glitches that go together to make Invinciblity is quite remarkable! There’s clearly some pretty broken stuff with Strong throw and cancelling moves with Sonic Booms :)

Now you have a comprehensive repetoire of Guile Glitches in SF2:WW. Try them out, none are actually all that difficult. And try them in combinations! It’s a lot of fun :)